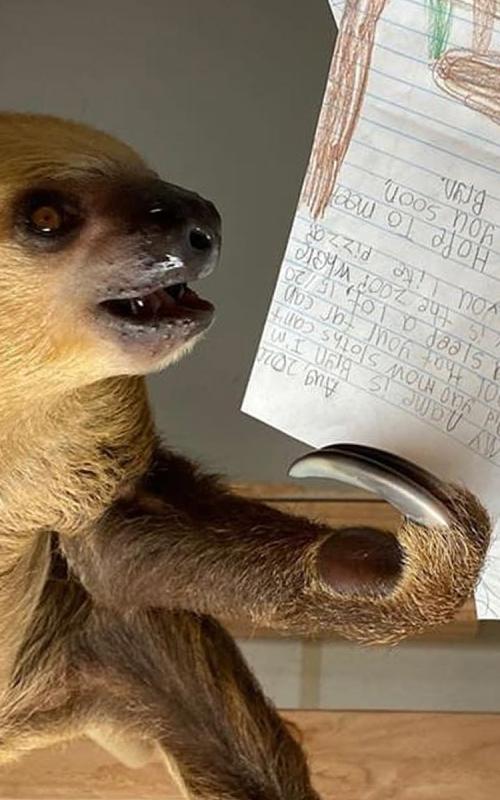 Some of my friends have informed me that this is the time of year when many small humans typically spend their days learning in a place called “school.” But this year for whatever reason, some kids are learning at home.

Then I, and I alone, had a brilliant idea – what if we turned Billings into “school” so kids could get out of the house (with their parents, of course) and enjoy some socially distanced hands-on learning, just like I do?

The good folks at Visit Billings agreed and asked me to put together a syllabus. I have no idea what a syllabus is, but here is an overview of what you can expect to learn about when you and your family take a road-trip to Billings.

Some might call this “Biology.” All I know is that it’s my favorite school subject, because I am an animal, and I love to eat plants. There are plenty of great places to learn about wildlife from Montana and beyond here in Billings.

Obviously, you can start at my house at ZooMontana. In addition to a visit with your favorite sloth (me), you can encounter animals from the 45th parallel and learn more about the Zoo’s animal rescue program. A lot of my friends are here at the Zoo thanks to that rescue program. ZooMontana also is an arboretum, which is just a fancy way of saying that we have a nice garden here. The Sensory Garden is designed so that sight and hearing-impaired visitors can enjoy the experience as well.

I had no idea, but apparently things live underwater, too. Stop by Scheel’s and visit the 16,000 gallon aquarium for a colorful display of fish and coral. While physical education would never be part of my personal itinerary, Scheel’s is a shopping plaza specializing in all sorts of sporting gear in case you want to do some independent study.

Next, make your way to the Montana Audubon Center and Norm’s Island. Experience the beauty of the Yellowstone River, the longest un-damned river in the lower 48 states or observe Montana wildlife at the Helen Carlson Cummins Bird Garden.

Did you know Billings has been around since 1882? That means that Billings is, like, 5 times older than me. (Listen – we aren’t covering math on this adventure, ok?). Here are some of the places where you can learn all about what happened from even before 1882.

For example, although could technically be considered art class, you can explore history at Pictograph Cave State Park. The site has been in the making for thousands of years! Explore three caves and see evidence of habitation from 2,000 years ago.

Be sure to stop at Yellowstone Kelly Interpretive Site. Luther Sage “Yellowstone” Kelly was one of the most notable American veterans. Kelly was laid to rest in June of 1929 with full military honors overlooking the Yellowstone Valley.

In my research I discovered there was a significant battle here a long time ago that you should learn about. Little Bighorn Battlefield National Monument memorializes the site of the Battle of the Little Bighorn which took place on June 25-26, 1876 between the United States Seventh Cavalry Regiment led by Lt. Col. George Armstrong Custer, and the Sioux and Cheyenne under the political and spiritual leadership of Sitting Bull. The Battlefield was originally named Custer Battlefield National Monument, but President George H.W. Bush renamed the site in 1991. It is now representative of those who were in the battle: Native Americans and the 7th Cavalry.

At this point, just like you might have done in kindergarten, I would recommend a nap. I’m thinking 15 to 18 hours or so should be sufficient. Hey, it’s exactly what I would do.

Anyone who knows me will tell you that I have an immense appreciation for art and music. Mostly, this is because I can be completely still while enjoying these subjects.

The Yellowstone Art Museum sparks imagination and curiosity through rotating exhibits and collections of art, significantly on Montana and its surrounding regions. Pick up a key to the Visible Vault for a behind-the-scenes glimpse into where and how art is stored when it’s not on display in the museum's exhibit.

Next, check out the Billings Symphony Orchestra, Babcock Theatre or Art House Pub and Cinema to enjoy some of the performing arts. Prior to getting this gig as a Visit Billings blogger, I was hoping to produce the one-sloth play I wrote about my journey to Billings. However, I am sure you will find some equally inspired performances at these venues.

Finally, houses can be art, too. I’m told the actual name of this art form is “architecture.” Head to the beautiful Moss Mansion. Constructed in 1903 and designed by renowned architect Henry Janeway Hardenburgh. The Moss Mansion influenced the culture of Billings with its inspired craftsmanship and architecture. I wonder who was the architect for my house at ZooMontana?

Well, that seems like enough learning for one visit. You’re probably ready for college now, at least. Am I a great teacher, or what?!?